What is vitamin B2 used for? 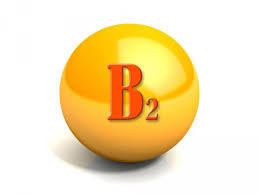 Vitamin B2, also called riboflavin, is unique among water-soluble vitamins. In the human body, it is an integral component of various coenzymes. It functions primarily as a coenzyme for many metabolic processes in the body. It plays an important role in releasing energy from carbohydrates, fats, and proteins. It is one of the essential B vitamins, known to help support adrenal function, help to maintain the integrity of red blood cells and nervous system function, and facilitate key metabolic processes. It promotes regular patterns of growth and development. Riboflavin is involved in energy production as part of the electron transport chain that produces cellular energy. It plays a key role in mucus membrane maintenance, infertility, and the maintenance of the health of the eyes, skin, and nervous system.

Poor riboflavin – Vitamin B2 – status in Western countries seems to be of most concern for the elderly and adolescents, despite the diversity of riboflavin-rich foods available. Riboflavin deficiency is usually due to dietary inadequacy but can occur most frequently in people with long-standing infections, liver disease, and alcoholism. The first signs and symptoms of deficiency are a sore throat and sores at the corners of the mouth. Worsening symptoms include a swollen tongue, seborrheic dermatitis, anemia, and impaired nerve function.

It is well established that riboflavin participates in a diversity of redox reactions central to human metabolism. Inadequate intake of riboflavin would, therefore, be expected to lead to disturbances in steps in intermediary metabolism, with functional implications.

Meat and fish are good sources of riboflavin, and certain fruit and vegetables, especially dark-green vegetables, contain reasonably high concentrations. The current evidence shows that diets low in riboflavin present specific health risks. There is reasonably good evidence that poor riboflavin status interferes with iron handling and contributes to the etiology of anemia when iron intakes are low. Various mechanisms for this have been proposed, including effects on the gastrointestinal tract that might compromise the handling of other nutrients. Current interest is focused on the role that riboflavin plays in determining circulating concentrations of homocysteine, a risk factor for cardiovascular disease.

When Vitamin B2 deficiency occurs, symptoms such as dry, red, and flaky skin, cracked lips, sore throat and tongue, cracks and 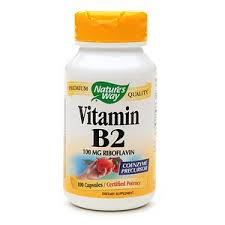 sores on the lips, irritated eyes, light sensitivity, poor concentration, memory loss, and burning sensation in the feet are common. Additionally, red blood cell levels may decrease. Riboflavin deficiency frequently occurs in combination with deficiencies of other water-soluble vitamins. It may exert some of its effects by reducing the metabolism of other B vitamins, notably folate and vitamin B-6.

Common diseases and illnesses that may be prevented or alleviated via Vitamin B2 supplementation include neonatal jaundice, anemia, anorexia/bulimia, cataracts, cognitive function, depression, and migraines.

As with most B vitamins, the more food you eat, the more B vitamins you need to support the metabolic processes that will convert that food into usable energy. Athletes may require more Vitamin B2 due to both increased caloric intake and increased need for exercise.

Athletes, young people experiencing growth spurts, elderly people, and people suffering from stress and alcohol and drug abusers benefit from additional riboflavin. People with ulcers may also receive such treatment with vitamin B2 as a supplement.

Vitamin B9, also known as folate, is an essential part of the vitamin B family. In vitamin B9, often interchange the words folate and folic acid. However, there is a

Vitamin B6 is important for men. Vitamin B6 or Pyridoxine is a member of the B complex vitamins. It provides the body with an appropriate balance of sodium and potassium